“The intense pressures of cultural and religious practices on young Muslims provide stress at home and socially.”

Stigma surrounding mental health is something that every community deals with, even in this current day and age. These stigmas are even more pronounced in traditional religious communities where mental illness gets chalked up to supernatural entities. As a result, many individuals in Muslim communities, especially the youth, do not get the attention they need in order to properly and safely tackle mental health issues. This is evident in local tragedy from last summer where a 29-year-old man named Faisal Hussain opened fire on a busy Toronto street, injuring thirteen, and taking the lives of three and his own. Reports indicated Faisal struggled with psychosis, to depression, to self-harm all his life. Although it was reported Faisal and his family sought help through therapy and medication, many individuals in the Muslim community run into barriers when it comes to seeking help without the risk of being ostracized or not taken seriously. Also, the current institutions in place do not seem to be as efficient and effective as they should, as seen in Faisal’s case where he did seek help and it still was not enough. Though this story stands as an extreme example, it still shows the extent to which the lack of proper treatment and social barriers or stigmas in these areas can lead to.

Two issues that are relevant in the lives of many Muslim youth today are self-harm and substance abuse. These two issues, already a serious global health and medical problem affecting people of many backgrounds, are highly stigmatized within Muslim populations. This leads to a lack of self-reporting and subsequently, a lack of treatment for those harming themselves physically or through repeated drug use. The intense pressures of cultural and religious practices on young Muslims provide stress at home and socially. A study in the UK looking at self-harm among South Asian women found that a range of systemic issues such as social pressures, domestic violence, language problems, racism and stereotyping, and the concept of honor in family life resulted in mental distress —self-harm was used by the women as a coping strategy in response to these stressors (1). In addition to self-harm, the use of drugs was also used to cope. A study in the US looking at alcohol use among Muslim undergraduate students found that first and second generation Muslim immigrants viewed both episodic excessive drinking and drinking in general as normal, largely due to the effects of acculturation. Additionally, the results of this study showed that these individuals hid these behaviors from their families and the community from fear of being shamed (2). We found studies addressing self-harm and substance abuse in the Muslim population in many countries, but we found no similar research being conducted in the Canadian context.

“We found that some of the most common issues in the call logs of Naseeha’s helpline were related to self-harm, drug use depression, and pornography consumption.”

Naseeha is a mental health organization aimed at providing services to Muslim youth such as a peer support helpline, education and outreach programs, and research towards breaking down stigmas and working towards the betterment of how mental illness is addressed in our community. In the summer of 2018, Naseeha’s research team looked for areas within the Muslim youth community that were in need of attention. We found that some of the most common issues in the call logs of Naseeha’s helpline were related to self-harm, drug use depression, and pornography consumption. Callers were often seeking help and guidance on these issues and we decided the best place to start would be to gage the severity of the issue.

In the fall of 2018, a short survey was created as a preliminary tool to assess the prevalence of these issues among our community’s youth, more specifically Muslims between the ages of 16 and 25. Demographic questions were included to inquire about the age, ethnicity, education, living situation, and religiosity of the respondents. We compiled questions related to substance abuse and self-harm. The questions we used were based on existing surveys exploring similar topics at the University of British Columbia and the European Center for Drugs and Drug Addiction.

For substance abuse questions, we asked about the type of drugs consumed, frequency of consumption, age of first use, driving factors, and whether or not respondents thought that they themselves, or if they have close friends and family that have a “drug problem”. For self-harm questions, we asked about depressive symptoms, onset of urges and acting on urges to self-harm, frequency of harming, methods of harming, and if they had thought about taking their lives or making attempts. These questions all served the purpose of gaining a broad and general understanding on what areas of mental health require more research. This included important topics such as initiation of drug use, correlations between family and social issues, and self-harm practices.

The survey was created online using Google Forms, a program that most high school and university students are familiar with. The survey was disseminated across social media platforms including Twitter, Facebook, and Muslim Student Association groups in Ontario. 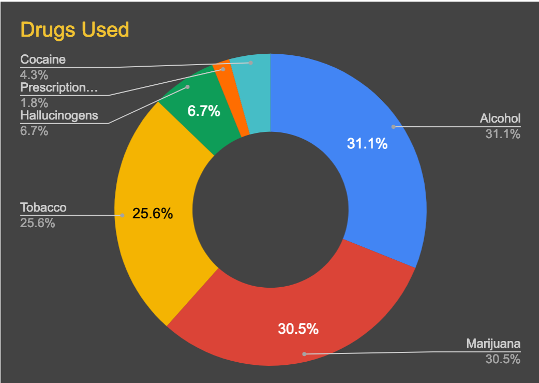 After one month, we had 216 responses, 162 of which met our inclusion criteria. We found that, almost half of Muslim youth respondents have consumed drugs. Of those who have used drugs, the most commonly consumed drugs were alcohol and marijuana (Fig.1), which were first consumed either in high school (60%) or in university (30%). The reasons for substance use were reported to be out of curiosity (41%) and due to use among friends (26%)— indicating heavy influence from external pressures outside of home. In addition of those who had consumed drugs, 85% rated religion as important of very important in their lives. This indicated that drug use was not a result of religion being rated as not important, challenging the Muslim community’s understanding of driving factors. Also, 63% of youth consuming drugs lived with their parents or spouse, indicating that consumption does not necessarily correlate with living away from home. When asked if any Muslim family or friends have a “drug problem,” 40% said they know someone, and 6% claim to have a problem themselves. 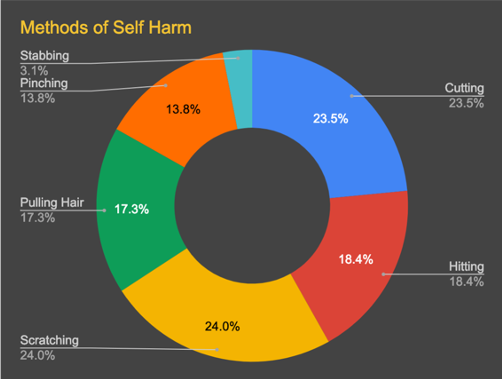 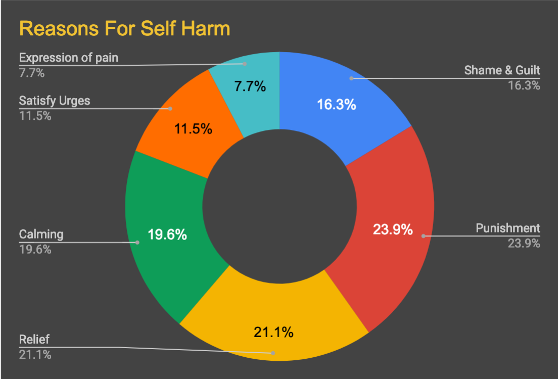 Looking at self-harm responses from the survey, we found that a large majority of respondents reported feeling down or depressed on a weekly basis (80%). When asked if they have ever had the urge to intentionally harm themselves, 60% had the urge, 46% had acted on the urge, and 17% frequently harm themselves (at minimum once a month) — indicating that self-harm behavior is not as small of a phenomenon as many Muslims may think. The most common methods for self-harm were scratching, cutting, and hitting, respectively. The primary reasons for self-harm were reported as a desire to punish themselves, to feel relief, or due to shame and guilt. When asked about suicide, 62% had suicidal thoughts and 19% had attempted to take their own lives, these numbers were higher for females than males with 70% of females having suicidal thoughts compared to 40% of males, and 22% of females attempting suicide compared to 12% of males. Also, 87% of those who engaged in self-harm rated religion as important to very important.

“The most concerning finding is the prevalence of drug consumption, with almost half of respondents consuming substances, and the large percentage of youth engaging in self-harm behaviors and suicidal thoughts and actions.”

Based on these results, it is clear there is a need for research on substance abuse and self-harm in the Muslim population. The most concerning finding is the prevalence of drug consumption, with almost half of respondents consuming substances, and the large percentage of youth engaging in self-harm behaviors and suicidal thoughts and actions. Next steps require a larger sample size. The small sample size (n=167) used in this study provided a limited and rough understanding of the community trends. Moving forward, we hope to increase research efforts on our part, and focus on increasing self-reporting among youth.

Research on the effectiveness of current community support institutions such as mosques, mental health facilities, and community centers and programs is also needed. Many Muslims feel uncomfortable or scared to reach out and address these mental health issues, fearing shame and ridicule. Many Muslim women may also feel uncomfortable seeking help in male dominated institutions. Thus, finding wats to improve access to treatment will allow more people to seek help.

Research in drug-specific statistics is also needed in young Muslims. Amidst marijuana legalization, fentanyl laced recreational drugs, and abuse of prescription medication such as Adderall and Xanax, access to drugs leading to addiction and other harmful side effects is higher than ever. Research on prevalence, methods of use, and points of access for these drugs can provide further information or interventions.

Lastly, research is needed on differences between ethnic groups, in both self-harm and drug-use within the Muslim community. Drug use in many ethnic communities is very common such as shisha tobacco in Arab communities, khat in Ethiopian and African communities, and opioids in Afghan and Pakistani communities. Understanding the impact of these addictions and practices on first and second generation youth, can be helpful in solving these issues.

Arfken, Cynthia, et al. “Ten years of substance use research in Muslim populations: Where do we go from here?” Journal of Muslim Mental Health 1 (2016). Web. Sept 2018) 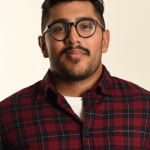 Hasan Khan is a student in his fourth year of undergraduate studies at McMaster University, pursuing a bachelor of science in kinesiology. A background in volunteer work for Habitat for Humanity, local food banks, and international medical missions has given him an eclectic mindset for his pursuits in healthcare. He is currently working as a research assistant for Naseeha, a mental health organization aiming to create a support platform for Muslim youth across Canada.